CILcare is pursuing a major research project in tinnitus aiming to develop a preclinical tinnitus detection model with novel techniques that can be applied to humans. 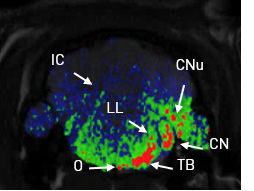 Montpellier, September 21st, 2018: CILcare, a world-leading company specialized in the research and development of drugs and medical devices in the field of hearing, is announcing the launch of the second phase of their tinnitus research project DETECT today. DETECT-2, a public/private project, is being conducted in collaboration with the University of Montpellier, and aims to develop a preclinical tinnitus detection model, notably with the use of a new MRI imaging technique.

Tinnitus is the perception of a noise that one hears in the absence of external stimulation. Occasional, intermittent, or continuous, tinnitus can occur after physical or acoustic trauma, as a result of taking certain medications, and can be associated with several diseases including Meniere’s disease. In most cases, tinnitus is accompanied by hearing loss. 600 million people in the world suffer from tinnitus, of which 1 – 2% with severe cases. For these patients, this symptom greatly impacts their quality of life and causes chronic stress which can lead to suicide in the most extreme cases. To date, there is no therapeutic solution to treat tinnitus due to a lack of understanding of its physiopathological mechanisms, the lack of reliable models for developing new compounds in preclinical research, and the difficulties in accurately diagnosing patients.
“DETECT-2 will place CILcare at the forefront of tinnitus research and development; no other company in the world has the expertise of CILcare’s team and our partners for testing the effectiveness of new therapies in this area”, explains Dr. Sylvie Cosnier-Pucheu, Scientific Director of CILcare, DETECT-2 Project Manager.

“DETECT-2 will allow us to generate new knowledge which should significantly accelerate the development of preclinical tools to better understand the effects of medicine on the inner ear and the auditory cortex. The relationship established between CILcare and the MRI platform of the University of Montpellier, directed by Dr. Christophe Goze-Bac, is an essential asset to the success of this project”, adds Dr. Yves Cazals, former Research Director at INSERM, President of CILcare’s Scientific Committee.

Given this perspective, CILcare is already able to provide its clients (pharmaceutical and biotechnology companies) a unique offer for evaluating the effectiveness of new therapies in treating tinnitus. By meeting the expectations of the industrial players in this field, CILcare hopes to accelerate the arrival of therapeutic solutions for patients suffering.
DETECT-2, valued at 1.2 million euros, is supported by the Region of Occitanie, BPI France, and the French State, via the funding of future investment projects and innovation aids. On a daily basis, the project is assisted by the economic development agency AD’OCC and by Evoly Consulting. The funds that have been raised have already enabled the creation of a research engineer position within CILcare, as well as the funding of a postgraduate in biophysics with a specialty in MRI techniques position.

About CILcare: CILcare is a CRO specialized in hearing and is a world leader in this field. Established in Montpellier, Paris, and Boston, the company assists pharmaceutical industries, biotechs and medtechs in the development of new therapies to prevent and treat hearing loss, tinnitus, and otitis. Created in 2014 by Celia Belline and Doctors Marie-Pierre Pasdelou and Sylvie Cosnier-Pucheu, CILcare now employs 17 workers.

About DETECT-2: DETECT-2 is a collaborative research project which carries on from DETECT-1. The goal of this project is to set up a preclinical model for inducing and detecting tinnitus with the help of new measures which can be applied to humans. Furthermore, different measurement techniques will be studied and correlated, including electrophysiological measurements, behavioral tests, and magnetic resonance imaging.