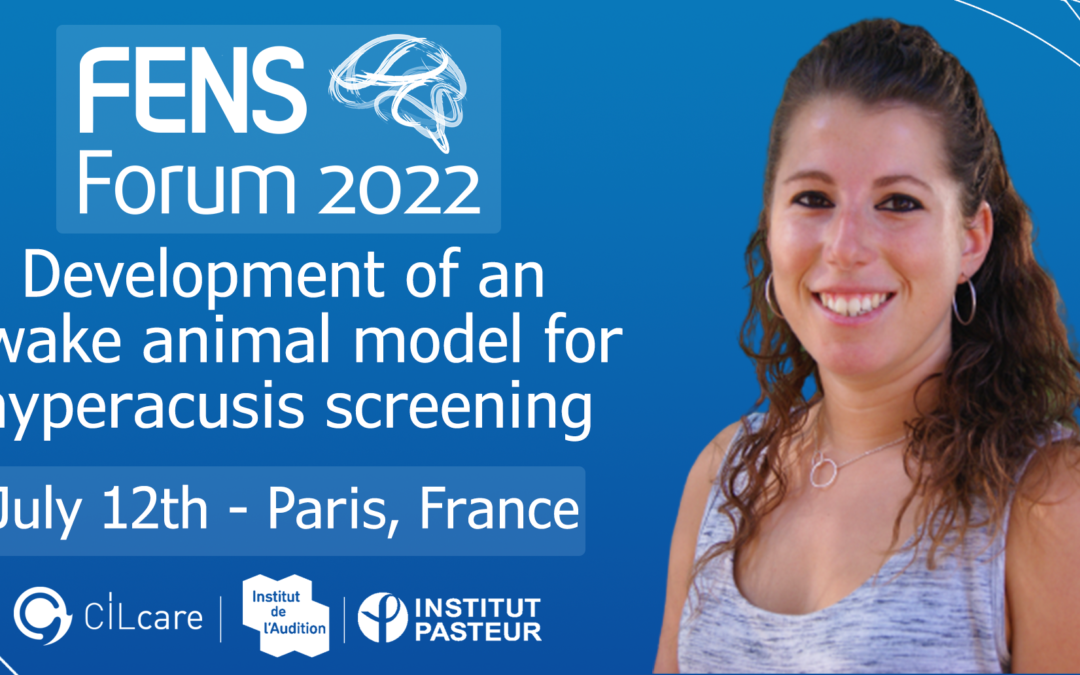 We are pleased to announce that Camille Dejean, Research Engineer at CILcare and PhD student in collaboration with the Institut Pour l’Audition and Pasteur Institute, will be at the Federation of European Neuroscience Societies’ 2022 Forum on July 12th to give a poster presentation on the development of an awake animal model for hyperacusis screening.

For some people, auditory stimulation can be incredibly unpleasant, possibly painful, even at loudness levels considered normal by others. Epidemiological reports suggest that between 2% and 15% of the population experience a form of hypersensitivity to everyday sounds, ranging from discomfort to pain, which is called hyperacusis. This is, by far, the leading form of hypersensitivity to sound. We still know little about the pathophysiological mechanisms underlying hyperacusis, in particular as we lack reliable animal models, for which the objective quantification of a subjective perception has proved to be difficult. Moreover, hyperacusis and tinnitus are frequently occurring concurrently, which complicates the deciphering of involved mechanisms. There is currently no treatment available to reduce these symptoms.

Hyperacusis was specifically investigated in the study that will be presented during the FENS Forum, in which a cohort of awaken mice was exposed to an acoustic trauma. This lead to temporary hearing loss, which is known to induce either tinnitus or hyperacusis or both. Recent studies in animal models have suggested that the neural correlates of hyperacusis would be mediated by enhanced sound-evoked responses and neuronal spiking activities in the auditory cortex, i.e. hyperexcitability, as it is commonly defined. In order to investigate this hypothesis, several behavioural measures were performed, as well as electrophysiological measures of the peripheral and cortical neural response to sounds in awake animals before and after trauma. The goal was to find a combination of neural biomarkers and behavioural changes reliably characterizing the presence of hyperacusis. In particular, whereas auditory thresholds fully recovered after trauma, modifications of the acoustic startle reflex were observed, i.e. the behavioural response to loud sounds.

Camille Dejean will be presenting the latest advances on this project at the FENS Forum on July 12th, 2022 at 2pm CET. Camille has joined CILcare in 2018 as a Research Engineer and has since contributed to CILcare’s excellence and expertise. She has since started a PhD thesis as part of collaboration between CILcare and the Pasteur Institute/Institut pour l’Audition, and she is mentored by both Dr Sylvie Pucheu, CILcare’s Chief Scientific Officer and co-founder, and Dr Boris Gourévitch, Researcher at the Institut de l’Audition.

The Forum of the Federation of European Neuroscience Societies (FENS) is an event that gathers neuroscientists from all around the globe, with a wide range of symposia, technical workshops, plenary lectures and poster sessions. This event is also an opportunity for scientists to connect with their peers and other experts. This year’s edition will be held in France, at the Paris Expo Porte de Versailles on July 9-13.